Dedicated time and effort has been made to make this experience as accessible as possible.

‘The calm instilled by Sylvia Rimat’s gentle and immersive woodland audio-walk is potentially so restorative it should be part of every school’s extramural plans and feature on everyone’s to do list.’ Review Stage Talk Magazine, Simon Bishop

A playful, immersive and deeply human audio-walk through Leigh Woods, exploring our connectivity with the woodland around us. The App is based on the widely acclaimed sell-out audio walk ‘Some People Climb Up’ which engaged live audiences in autumn 2019. Equipped with smartphone and headphones, individuals can download the geo-located walk and will be guided through Leigh Woods. Listening to Rimat’s voice and an evocative soundscape, they will experience the woodland through all the senses.

The walk is also a journey through the metaphorical forest in our brain, which is populated by neurons that look like tree structures. The work draws on neuroscience, the intricate fungal networks between trees, plant signalling, symbology and our own personal stories related to the woods. The work taps into climate emergency, grief and notions of care beyond the human species.

Based on an original concept created with Cat Jones. 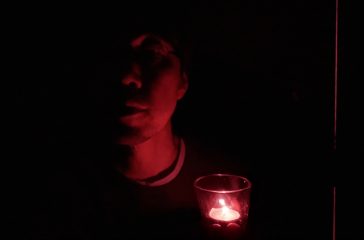 Join the newly commissioned Bristol broadcast and share in the final hour of our day together with fellow strangers.

In Between Time's Artist Seed Fund

In response to what artists and creatives were telling us during the pandemic, we launched In Between Time’s Artist Seed…