A refusal to be silent

We are volcanoes. When we women offer our experience as our truth….all the maps change Ursula K. LeGuinn

“I have been practising roaring for months. I build my roar from somewhere in the pit of my stomach so that it rises up through my chest gathering momentum as it travels. Only now does this roar have the resonance I am seeking, and it no longer hurts my throat on the way out. I imagine the force of my voice stopping traffic and creating mountains. Instead my roar remains trapped somewhere coming out more like a dark rumble than a battle cry.

2018 is the Centenary of the Representation of the People Act in which the right to vote in the UK was given to all men aged 21 and over, and to women over 30 who were economically privileged with land or premises with a rateable value above £5.  It took until 1928 – ten years later – for the Act to be repealed to give women the vote on equal terms with men.

The 1918 Act also gave women the right to stand for Parliament. It marked a moment when the courage and determination of a group of women changed the course of history for future generations.  These women – the Suffragettes – fought for ‘Votes For Women’ in a co-ordinated nationwide campaign of direct action and civil disobedience. They fought for a basic human right. To be recognised, to be valued, to be heard.

100 years on – just as they did back then – women represent just over half of the UK’s population. Yet today women in the House of Commons still only represent 32% of all elected MPs, 26% of Members of the House of Lords and 26% of Cabinet posts.  In Bristol women make up 51% of this city’s population, but only 30% of its councillors.

In The Mother of All Questions, Rebecca Solnit writes ‘If libraries hold all the stories that have been told, there are ghost libraries of all the stories that have not’. I want to find these ghost libraries and tear open their doors, to hear the voices and their stories, to see the world anew. During the first US presidential debate in 2016 Donald Trump interrupted Hillary Clinton 51 times. Imagine the resilience and energy required to keep your voice strong and unwaivering in the face of this ridicule. Silencing effects all women even the most powerful of us.  Think where our energy could be directed if all our voices had the simple freedom of being heard. Together we could obliterate the gender pay gap, toxic masculinity, gender-based violence, sexual harassment, and the casual daily sexism that women deal with every day. We could disarm the misogyny that pushes our roar right down into our chests and stamps on the throat of our song.  This is why I am roaring. In the face of this silencing, in support of these ghost stories. Each roar resists the expectation that our voices will be tentative, and our truth suppressed.

When I think about the women in my family I roar. My mother Mo who, as a young woman with an oppressive Father, was not able to wear what she chose or follow the educational path and career of which she dreamed.  My grandmother Dot who left school at 14 to go into service and once married was prevented from working or earning in her own right. Generations of women in my own family whose skills and potential were thwarted. I am angry for my daughter Blue and the fight I must pass on.  I think about the women who have fought on multiple fronts – disabled women, women from different heritages and the trans community who are busy undoing the edges of gender that prop the Patriarchy up. For all of them – and myself – I refuse to be silent. Silence is voiceless, excluded, unheard. Noise is stories. Noise is breaking things apart. Noise is liberation. Noise shatters silence. Blows open the doors of those ghost libraries. Noise is brave and out there and no I won’t shut up.

Commissioned by Bristol Women’s Voice and funded by Government Equalities Office and Arts Council England we have created We Are Warriors, a sound and light installation to mark the end of Bristol’s Deeds Not Words programme that celebrates this important Centenary moment. We Are Warriors is a communal act of resistance, a refusal to quieten down. It brings together over 130 women’s voices that together are beautiful, unsettling, raw and real. We listened and together created a magnificent roar for a fairer and more equal world.

During Autumn 2018 we worked with Breathing Fire Playback Theatre to create workshops across Bristol. We met in schools, WIs, community centres and women’s prisons. We invited women to rise on the shoulders of the Suffragettes, to tell us their stories, to shout, whisper, yell and scream. We met and recorded women and girls aged 8-85 asking them what it feels like to be a woman and what we still need to fight for.

Our voices rose in anger. Sometimes in quietness. Always with power.  At first we were tentative but together we became an immense, warrior cry. We have cared for and added each voice into the sound design of We Are Warriors. Inspired by our strength and solidarity, the installation contains over 2000 lights. Each light represents one of the women we met, their ancestors and descendants. From the moment the installation opens we will invite the public to add their own light. By the time the work has finished together we will have created a vast and powerful constellation.

We Are Warriors is made with those who identify as women but it is not a project about women’s experience alone. Patriarchy demands complicity from many and silence from us all.  Though patriarchy privileges men and masculinity it also oppresses anyone who rebels against it.  We Are Warriors is made by women, but it is as much about any voice that has been silenced, any future curtailed.

Mary Sanderson, at 80 years old is one of We Are Warriors contributors. She says ‘’The world really is yours.’ I watch my face as I roar into the mirror. I conjure the spirit of the Suffragettes who starved, were force-fed, threw bricks, chained themselves to railings, laid bombs and died for equality and the future.  My eyes spark, my brows furrow, my spit flies.  My roar has travelled a long way and taken a long time to get here. I might not be a lion, but I am fiercer than I sound.”

We Are Warriors is created by Helen Cole and commissioned by Bristol Women’s Voice for the Deeds Not Words programme of events to mark 100 years since the first women were allowed to vote. It has been produced by In Between Time, is funded by Government Equalities Office and Arts Council England and is supported by Arnolfini. 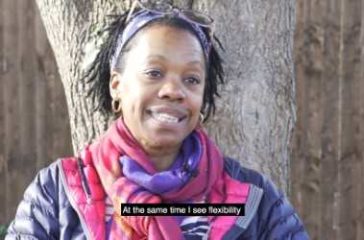 We Are Warriors - Behind the Scenes film 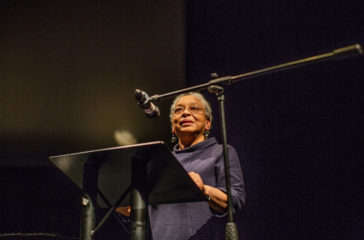 A reflection on We Are Warriors 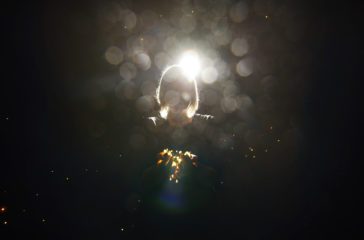 A magnificent roar for a fairer, safer and more equal world. A sound and light installation containing thousands of tiny…