An interview with Heather Agyepong

'The body is an archive. It remembers everything - even the things that the head forgets.'

An interview with Heather Agyepong on her The Body Remembers

Tell us how the commission came about

The commission came about in maybe 2017 or 18. I was working with Fuel who are based in London in Somerset House. I worked with them on an acting project and then Kate from Fuel found out about my artistic practice and was interested in my way of working. She just said ‘We’d love to work with you, what are you thinking about?’ And I said, ‘I’m just thinking about the body and moving’, but that was all I had. Kate was excited by it though and that was the beginning of the journey for me.

What was the inspiration for the project?

I think the inspiration for the project was a personal experience of asking myself ‘why am I so disconnected from my body?’ I was interested in this culture of feeling really cut off from our bodies. Everything feels emphasised on the cerebral. I was interested in the body being an archive or carrier of memory, story and trauma. Is there a way for me to listen more to my body? Do other people have this experience of not really listening to their bodies? That was the core question of the work. Then it developed as I considered what I wanted to do and as I considered what sort of medium of art I wanted to jump into. It felt like movement was really, really important. As I explored that a little bit more through research and reading, I discovered that movement therapy is really important and that trauma recovery and mental health healing all have something to do with this. It was as if my body was telling me that movement was going to help me heal. That’s where the project was birthed from; moving through impulse to have a kind of feeling of catharsis and release. These were the foundations of the journey.

Tell us more about your collaboration with Gail Babb, Gillian Tan and Imogen Knight on the show?

So, first of all, Gail Babb, and Imogen Knight are co-creators of The Body Remembers. Imogen was my first co-creator; Imogen uses the body through authentic and imaginative ways, that’s always been part of her practice and I was really intrigued by her way of working . I saw a piece of work she did at The National, Les Blancs, and I was blown away by it. Somehow, Fuel was working with her and I was like ‘Oh my goodness You’re the woman who made that piece of work!’ We just started talking about authentic movement and impulse, and though I had no experience, Imogen guided me through that process of moving and moving away from choreography and focusing on what your body wants to say.

Gail used to work for an organisation called Talawa and I worked with Gail there. She’s just a flipping visionary. I knew that although the piece is not linear or a story, she’s very good at creating some sort of feeling of narrative and clarity so I thought she would be the best person to help with the dramaturgy.

Gillian Tan who created the AV and lighting design is just an extraordinary artist . She was really intuitive in terms of feelings or ideas. She would just say ‘what about this?’ She was really good at using her intuition to create these beautiful projections.

I also need to mention Donato Wharton and Tanya Stephenson. Donato is our composer and sound designer and Tanya is our creative stage manager. They were incredible at creating a beautiful collaboration and great offerings to the piece. The whole team worked very much holistically.

How important was it to work with Psychoanalytic Psychotherapist Dawn Estefan for the project?

Dawn Estefan, who is the resident psychotherapist, was imperative to the work because I was interviewing people not about their traumatic experience but what was happening in their bodies. Without having that level of care and detail it would have been potentially triggering or retraumatizing. Having Dawn there, having a critical eye to make sure the space was safe for both the participants and me really was crucial to making this work feel safe and comfortable for both myself and the participants. The advice she gave was just really useful, that extra level of compassion that she brought to the piece was so important. We couldn’t have done it without Dawn.

I think the inspiration for the project was a personal experience of asking myself ‘why am I so disconnected from my body?’

What have you taken away from creating the production?

I think what I’ve taken away from creating the project is that our gut, our impulse and instincts can be trusted. I think I always second guess myself for making work. Like I said, this work was really created through a feeling or a sense of what feels right. There’s no narrative, it’s really based on inner instinct for lack of a better word. We’ve made this piece of work, which I’m really proud of, entirely based on that. Of course, there’s expertise from the collaborators but that’s the core of what the work is based on. It’s made me trust myself a bit more. It’s made me realise that some of that inner wisdom is there and I want to continue to tune into that as I continue to make work.

What do you hope audiences will get from the performance?

For the audience I have no particular take home for them. I want them to have their own particular experience and specific experience in themselves. I hope that the audience just listens to themselves more, in whatever capacity that is. When you watch the piece, you’re actually asking to listen to what’s happening in your own body, not just about me. So I hope that it encourages a more empathetic ear to themselves. If I could do that, just that, then that would be magic.

Could you tell us a bit about the research and creative process behind the project?

Initially, the work was based upon my interest around trauma, recovery, healing and movement. I thought these were just kind of random ideas off the top of my head. When I started reading, I read a lot around trauma therapy, recovery and movement and how important it was in terms of helping mental health and as a therapeutic practice. I’ve never really come across it in the mainstream, I just thought it was this kind of kooky thing. So I read a lot around it, and spoke to lots of therapists. I spoke to Dawn, who is an expert in her field around trauma. We just spoke for hours. Even though the work isn’t that research heavy, I felt like I needed to have this information in me in order to access the work. I do this sort of practice, movement therapy practice, in my own life and it’s been incredibly beneficial to me. All of that knowledge seeped into the creation of the piece.

In Between Time presents The Body Remembers as part of IBT21 The Rupture, an expanded arts festival for the future. Discover the programme. 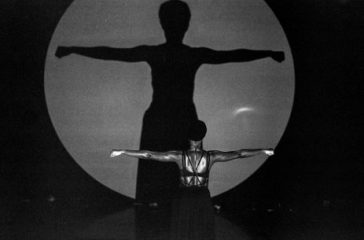